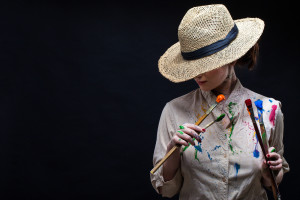 I remember the first time I was hired to choreograph a full length show. I had just graduated from undergrad and had, up until that point, choreographed a full body of work for my thesis show and several performances in Chicago, but had never been paid. A theater company in Chicago saw one of my shows and contacted me to choreograph a play that had dance and movement in almost every scene. This was the first time I was going to be compensated for my work as an artist and I was feeling incredibly excited. I was finally emerging into my industry as a professional.

I remember every moment of that process, because I was able to put my ’day job’ on hold while I completely focused on creating this work. It was a collaboration with an ensemble that challenged me to take my work to the next level of development, which was what I had dreamed about ever since I had graduated! I remember feeling anxious toward the end because I wasn’t sure when I might find another opportunity like it again.

When all was said and done I had a nice amount of money in my bank account for the first time in my life, and a whole new list of contacts to work with professionally. Yet I had some bills to pay and some debt to take care of, and after that was said and done I didn’t have much more than I had when I started. I slipped into a depression as a result, because I felt like I was back a square one.

That was I met a man named Brad Kohlman, an entrepreneur who had built a local advertising agency creating local commercials for small businesses. Brad hired me to work in his office as I needed a new ’day job’. He was a cigarette-smoking, crass Chicagoan with a loud voice and grand opinions. When he asked what I did and why I needed the job I told him I was an artist who ’desperately’ needed to work until I found my next gig. I’ll never forget his response.

’That’s a terrible way to look at things, kid.’

He had my attention, as I wasn’t expecting him to say that, and didn’t know what he was referring to.

‘You’re acting like an employee. You’re an entrepreneur- all artists are. But you’re acting like you work for someone else. You better learn how to manage that, or you’re going under, fast.’

Nothing like having the fear of life put into you on a Monday morning!

I asked him to explain further what he meant, exactly.

’If you’re waiting for someone to tell you what to do and how to handle your money, you’re toast. An entrepreneur knows how to take what they have and reinvest it in the right way to help the business grow. You just made good money- how did you reinvest it into your business?’

I had never considered this perspective before, but I knew in my heart that he was right. It was the missing piece that so many artists I admired seemed to know how to do.

’Where do you want to go next? That’s where you put it, and that’s all you ever need to know.’

The best part about this story is that he was right! Reinvesting in the next step I wanted to take for my business was all I ever really needed to know to make sound decisions, learn and implement powerful strategies and grow in ways I could have never anticipated.

I ended up working for Brad for two years, and during that time learning exactly how to reinvest in my business to grow in the way I wanted it to. I landed several choreography jobs during that time that helped me build my repertoire and savings. But most importantly, I was reinvesting my money in ways I would have never understood had he not showed me.

You can do the same for your business with your art, starting now. The secret is to work from where you are in this moment, and invest in the next step that leads you to where you want to go. Taking that step and perspective can set you on a track of ownership over your business, and move your from thinking you’re an employee to business owner immediately, no matter what your ‘day job’ may be.

I believe artists are hardwired to run the best businesses in the world. Help me prove my belief by taking action and sharing a theme that is integral to your art in the comments below or on Instagram using #artistsinbusiness and tag me: @artistsinbusiness!