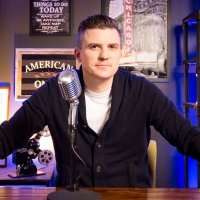 Jason Stapleton is best described as a modern day renaissance man. A former special operations Marine turned soldier for hire, Jason is an expert in counter-terrorism, counterinsurgency, and hostage rescue. He spent years living in the middle east working alongside a variety of government agencies in both Iraq and Afghanistan providing close protection to some of the worlds most powerful people.

In 2009, Jason left his life as a hired gun to pursue a career as an active currency trader and later founded one of the premiere trading education firms in the world.

Jason is currently the host of The Jason Stapleton Program, a daily video and audio podcast where he discusses current events related to economics and politics. His show has quickly grown to be one of the largest privately syndicated political shows in America thanks to his unique perspective and broad range of life experience.

In our discussion, Jason shares some of the most sound advice and tips for marketing your art- and some really important insight on running a profitable business that you don’t want to miss.